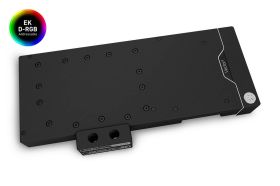 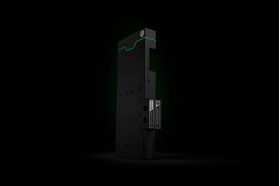 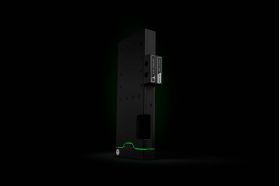 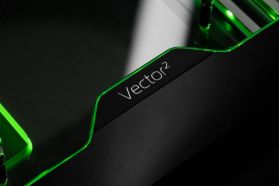 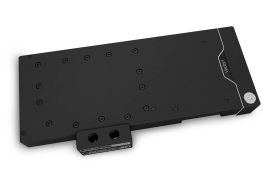 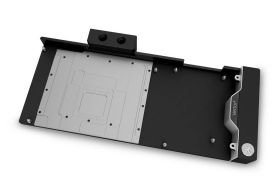 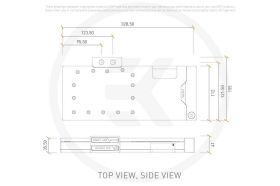 EK-Quantum Vector² FTW3 RTX 3080/3090 ABP D-RGB - Nickel + Acetal is an Active Backplate addon for the EK-Quantum Vector² FTW3 RTX 3080/3090 D-RGB - Nickel + Acetal GPU water block. It is made to actively cool the backside of all EVGA® GeForce RTX™ 3080 and 3090 FTW3 GPUs. As with the water block, when upgraded with an active backplate, the entire enclosure stays fully EK-Matrix7 compliant on every axis. This ensures ease of integration and alignment with all other EK-Matrix7 products.

The EK-Quantum Vector² FTW3 RTX 3080/3090 ABP comes with a new terminal that replaces the stock terminal arriving with the Vector² water block and links the water block and Vector Active Backplate into a single unit. This way, the whole enclosure requires only one inlet and one outlet, removing unnecessary additional tubing and reducing clutter. It is the ultimate aesthetic and performance solution that finds your GPU sandwiched between two water blocks, allowing maximum cooling.

The Vector Active Backplate directly cools the PCB hotspots that are found on the backside of the GPU core and the VRM (voltage regulation module). On the RTX 3090, the VRAM located on the backside is cooled, while the RTX 3080 gets cooling for the PCB located around the front-mounted VRAM. Cooling liquid is channeled over all these critical areas.

These new Vector² Active Backplates feature a Direct Link flow solution- the first multiple block solution to implement a conventional 4-port terminal layout. That allows serial and parallel connections from adjacent or opposing sides of the block. It was made possible by the addition of a machined brass insert that diagonally links the water block directly to the active backplate inside the acetal terminal. Direct Link proves invaluable when incorporating an ABP with a standard distribution plate or vertical GPU mount. Tactile magnetic covers are used to conceal the terminal screws, which allows rotating the branding when the GPU is inverted in the case.

A dense D-RGB LED strip illuminates the parting line of the stand-out element on both sides of the block. This subtle effect allows vivid displays of color while the block remains entirely black. The individually addressable RGB LED is compatible with popular RGB sync technologies from all major motherboard manufacturers. The arrow marking on the 3-pin D-RGB LED connector is to be aligned with the +5V marking on the D-RGB (addressable) header.