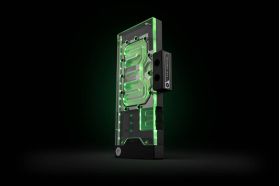 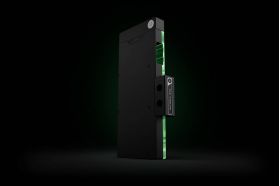 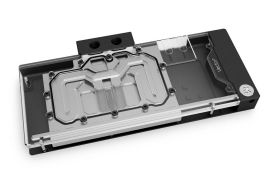 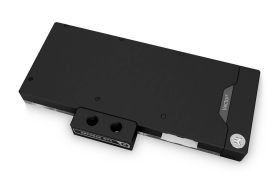 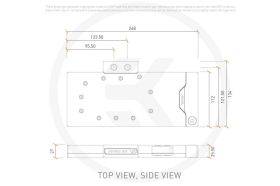 The New Vector² water blocks effortlessly solve the issue of excessive heat generation, during high load, on both the GPU core, voltage regulation module, and the GDDR6X VRAM of the reference design RTX 3080, 3080 Ti, and 3090 Graphic cards.

For the first time, a black full coverage backplate is included with the GPU water block. Its distinctive L-shaped profile encloses the entire GPU while, at the same time, increasing the cooling surface area. The backplate also comes with pre-installed captive backplate screws that simplify the installation. They ensure that the correct size screw is always used where it is needed.

The new look of the next-gen water blocks is dominated by minimalistic straight lines. An 11mm thick copper cold plate is used for all Vector² GPU water blocks. For Plexi versions, D-RGB Lighting is now deployed on the longest edge of the water block for improved fidelity and brightness from every viewing angle. The LED PCB is concealed inside a clean aluminum extrusion.

Matrix7 standardizes the dimensions of the products, including the port position and spacing, making liquid cooling loop assembly more intuitive and easier. EK-Quantum Vector² GPU water blocks follow the EK-Matrix7 standard, making them seamlessly integrate with the upcoming 2nd generation of EK Reflection distribution plates. This brings perfect alignment of ports in both horizontal or vertical positions, meaning less time used for planning of the loop, bending tubes, and the end result will still be an epic build.

New Cooling Engine - For Best Cooling In Every Scenario

The Vector water block actively cools the GPU, VRAM (on the front), power stages, and chokes in the VRM (voltage regulation module), and passively the PCB hotspots that are found on the backside of the GPU core, and the VRM (voltage regulation module). On the RTX 3090, the VRAM located on the backside is passively cooled, while the RTX 3080 gets cooling for the PCB located around the front-mounted VRAM.

The implemented 3rd-generation Vector cooling engine uses a novel 3D machined acrylic insert to improve flow distribution and thermal performance. This new cooling engine is based on an Open Split-Flow design, but the asymmetric shape of the jet insert helps distribute an even flow between the first and last copper fins. The fin structure geometry has been optimized to provide even flow distribution with minimal losses and optimal performances even when used in reversed water flow scenarios. It is also characterized by low hydraulic flow restriction, meaning it can be used with weaker water pumps or pumps running on low-speed settings, and still achieve top performance.

Premium Materials and Clever Engineering for Longevity and Top Performance

All Vector² GPU water blocks use a thick 11mm copper coldplate with an acetal terminal attached directly to it to create a robust assembly. A single o-ring design is used to create a seal between the cold plate and the water block top, reducing the number of failure points. This also means that you have seen the end of stainless steel bridge plates that were utilized on GPU water blocks before. This simple construction provides confidence during customization and maintenance. Tactile magnetic covers are used to conceal the terminal screws, which allows rotating the branding when the GPU is inverted in the case.

The cold plate is CNC-machined out of high-quality, pure electrolytic copper which is then nickel-plated, while its top is CNC-machined out of glass-like cast acrylic. The black anodized backplate has a new L-shaped profile that touches the base of the water block and encloses the entire GPU while increasing the cooling surface leading to even better performance.

For the first time, captive backplate screws are added to the backplate. They simplify installation, ensuring the correct length is always used where it is needed to avoid any user error or second-guessing.

The backplate improves the overall aesthetics of your graphics cards and also provides additional passive cooling for the GPU core, VRAM on the 3090 cards, and backside of the printed circuit board VRM section.

Sleek magnetic covers are used to conceal the terminal screws, which allows rotating the branding when the GPU water block and active backplate enclosure is inverted in the case, or being used on a vertical GPU mount.

Addressable D-RGB LED lighting is deployed on the longest edge of the water block for improved uniformity and brightness. The PCB and diodes are concealed inside a clean aluminum extrusion. The individually addressable RGB LED is compatible with popular RGB sync technologies from all major motherboard manufacturers. The arrow marking on the 3-pin D-RGB LED connector is to be aligned with the +5V marking on the D-RGB (addressable) header (Pinout: +5V | Data | Blocked | Ground).